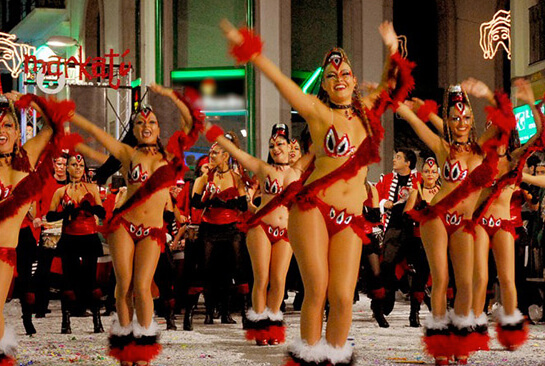 Sitges is a town of 28,000 people in a prime location, notable for its beaches, good connections to the outside world, its peace and of course its people and way of life. The truth is that when you open the door to Sitges you enter a different lifestyle, the Mediterranean, which is appealing to young people, adults and the retired alike.

Sitges is synonymous with authenticity, unique experiences, sustainability, rich in heritage and gastronomy, remarkable shopping, and a wide range of traditional festivals and cultural events. Sitges boasts exceptional natural resources that mix harmoniously with modern infrastructure to give our village its personality and quality.

Sitges has retained its cultural and artistic value. The remains of the medieval town sit alongside the great mansions which are a legacy of those who returned from the Americas with fortunes made during their American adventure. Sitges retains the bohemian atmosphere inherited from versatile artist Santiago Rusiñol who turned the town into the Mecca of Modernism. The town has been attracting and inspiring artists and painters for decades and is still home to a community of artists who exhibit their work in their own studios.

Thanks to its privileged location, the town enjoys a mild and temperate climate which makes the winters mild and the summers pleasurable, with an average temperature of 18.7º C and over 300 days of sunshine a year. This exceptional climate is due to its seaside location and the shelter it enjoys from the Garraf massif, which prevents the passage of cold winds from the north and northwest, as well as from the inland.

The name Sitges comes from the pre-Roman word ¨silo¨ meaning a deep hole or grain tower. Even before pre-neolithic times the first Sitgetans inhabited the place known as ¨cave point¨ located a little way past the Terramar golf club and the ¨La Punta hill¨, where today we find the church and town Hall. In the 18th century Catalonia obtained permission to trade directly with America. The economy was in the hands of merchants and the returning rich who refurbished the old houses of the village. The town was turned into a summer vacation spot for the Sitges “Americanos”. Since 1879 people enjoyed taking thermal medicinal baths and spas and then moved to the beach. Sitges became the holiday resort of choice for many Americanos who came to enjoy the waters.With the arrival of Santiago Rusiñol in 1891, Sitges became a focal point of modernism. In 1909, North American Charles Deering visited Sitges at the invitation of Ramon Casas and Miquel Utrillo and transformed calle Fonollar, a street of typical fishermen’s houses and the old hospital, into a palace. The Palau Maricel and Cau Ferrat (Rusiñol’s home-studio) became two centres of attraction for culture. Soon afterwards Francisco Armengol designed the Terramar garden-city and the sea promenade. In 1928, the Tourist Attractions Association was founded and in 1934 the tourist office. Thereafter Sitges was made into a landmark for European tourism.

Traditional festivities in Sitges are enjoyed with great intensity and popular participation; visitors and tourists mingling with villagers to experience them with authenticity. There are more than 50 events throughout the year, some of the most important celebrations include: the Carnival, the Barcelona – Sitges International Vintage Car Rally, Corpus Christi, the Fiesta Mayor, Santa Tecla, the Harvest Festival, the Wine Show and the International Fantastic Film Festival of Catalonia. Another tradition which has been revived  is the ‘Castellera’ (the human towers) with performances from April to October.

Corpus Christi (flower carpets): Declared a Festival of  National Touristic and Artistic Interest. During Corpus Sunday the main streets of Sitges are covered with carpets of flowers designed by the residents of the town, who spend all night working on them. In the evening a religious procession led by children who have just had their first communion walks through the carpets. Fiesta Mayor (main fiesta): declared a Festival of National Interest. On August 24th. the town celebrates Saint Bartholomew, one of its patron saints. In his honor on the 23rd. and 24th, giants, devils and the rest of the traditional dance displays parade the streets. It all starts with the tunes of the grallers (Catalan folk flute players) at noon on the 23rd and continues with a great fireworks display from Fragata beach before midnight.

Santa Tecla: Sitges’ ¨little main fiesta¨: Held in honor of another patron saint, Santa Tecla. Despite being more of a family festival than Fiesta Mayor, it includes great events such as a childrens´ parade held on September 23rd at 7:00am when children dress up in giant and beast costumes made by themselves.
Harvest Festival and Wine Show: Remembering the wine-making roots of Sitges, this event is celebrated every year coinciding with the international film festival. This event features a wine show that takes place along the sea promenade where the DO Penedés wines have a special relevance.

Sitges International Fantastic Film Festival of Catalonia: This festival, together with the San Sebastián International Film Festival, is one the most outstanding festivals of cinema in Spain. It has been held 47 times and specializes in horror and fantasy films. Throughout its existence it has attracted to Sitges such highly acclaimed directors and actors as Quentin Tarantino, Elijah Wood, Anthony Hopkins, Jodie Foster, Daniel Brühl, Santiago Segura and Luís Tosar. Particularly noteworthy is the very popular Zombie Walk.

Carnival: Sitges hosts one of the most traditional and highly attended carnivals in Catalonia. It goes from Fatty Thursday until Ash Wednesday and its highlights include the big parades on Sunday and Tuesday. At noon it’s time for the children’s floats and at night it’s the adults who fill the streets with debauchery and joy. Last year more than 50 floats, 2,500 dancers in fancy dress and 300,000 spectators attended.

Sitges International Vintage Car Rally: Granted the Festival of National Touristic Interest title, the International Vintage Car Rally has been organized since 1959 and brings together classic cars and morotcycles dating from before 1924, most  belonging to private collections. They arrive in Sitges from Barcelona via the corniche of Garraf with all the participants dressed in period costume. More than 60 cars and 15 vintage motorcycles took part in the latest rally. The event is complemented by an exhibition of exclusive luxury sport cars and music in the streets.

How to get to Sitges

Sitges is located 35 kilometers south of Barcelona, and has excellent connections by road, motorway and railway.

By car: A 30-minute drive along the C-32 motorway links us to Barcelona, and we are 45 minutes from Tarragona. From Vilafranca you can join the AP -7 motorway, which northwards goes to La Jonquera where it connects with the network of European motorways and southwards with the rest of the Spanish motorway network.

By bus: The company Monbus provides bus service that connects Sitges with Barcelona and vice versa, via the airport.

By train: Trains leave to/from Barcelona every 15 minutes approximately. The journey takes about 35 minutes. From Barcelona Sants station there are daily trains to the rest of Spain and Europe.

How to reach Sitges and Barcelona on public transport from the airport:

You can travel Airport – Sitges – Airport on either bus or train. By train you must change trains at El Prat de Llobregat station. The total journey time is about 45 minutes (depending on the day of the week and the frequency of trains). You can check train schedules here: www.renfe.com. By Bus: Monbus has a regular daily service to and from Barcelona that stops at the airport. For more information: www.monbus.cat And to go Sitges – Barcelona – Sitges, the easiest option is to take the train and get off at Passeig de Gracia, in the heart of the city. There is a train every 15 minutes and the journey takes about 35 minutes. For more information: www.renfe.com. If you prefer to travel by bus, check the timetables and frequencies here: www.monbus.cat.

This website uses cookies to improve your experience while you navigate through the website. Out of these, the cookies that are categorized as necessary are stored on your browser as they are essential for the working of basic functionalities of the website. We also use third-party cookies that help us analyze and understand how you use this website. These cookies will be stored in your browser only with your consent. You also have the option to opt-out of these cookies. But opting out of some of these cookies may affect your browsing experience.
Necessary Always Enabled

Any cookies that may not be particularly necessary for the website to function and is used specifically to collect user personal data via analytics, ads, other embedded contents are termed as non-necessary cookies. It is mandatory to procure user consent prior to running these cookies on your website.